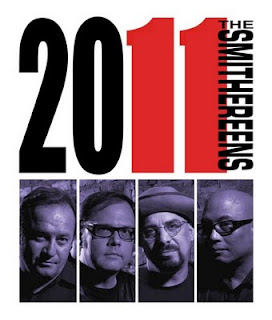 Evidently, The Smithereens are not content to be a reverse Spongetones (i.e. a originals band that becomes a Beatles cover band).

With over a decade passing since their last non-covers effort, I was a bit skeptical of 2011 despite the positive buzz I'd heard. After all, I was completely jazzed about 1999's God Save The Smithereens after hearing the killer "She's Got a Way" but the rest of the album fizzled. Would history repeat itself?

Luckily for all of us the answer to that question is a resounding NO! 2011 turns out to be the best collection of Smithereen tunes since at least Blow Up!, and may be the best since 11. "Sorry" kicks things off in vintage Smithereens style, easily the equal of earlier Smithereens classics. And this just begins a run of strong numbers: "One Look at You," "Keep on Running," and "Rings on Her Fingers" all hit exactly the right balance. It all sounds the way you would want a Smithereens album to sound.

The stately ballad "As Long As You Are Near Me" makes a serious claim to being the best one the band has ever recorded. Pat DiNizio's voice carries the tune along with a certain gravity, which is somehow enhanced by background "na na na na na na"s. Great stuff.

"Nobody Lives Forever" is a wonderfully understated rocker, one part personal philosophy, one part hand clapping sing-a-long, and all together fun. "All the Same" shows how recording all those early Beatles tunes has been rubbing off on the boys. Ringo's gonna demand a cut for the drum work alone.

All in all it has to be said this album works. There is less experimentation here, but that has to be expected for a band that has been at this as long as these guys have. The thing here is the songs and those kick ass.