Review: The Bottle Kids - Such A Thrill 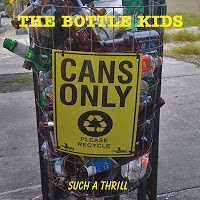 Who says you can't revisit the past?

So asks power pop virtuoso Eric Blakely - recording as The Bottle Kids - on this terrifically retro record. (Calling it a CD would ruin the nostalgia thing, don't-ya-know? Now, where's my 45 adapter?)

The comparisons flow fast and furious as the album proceeds; Paul Collins, Plimsouls, Dwight Twilley, 20/20, and anyone else that can put you into that 1979 state of mind you need from time to time.

The highlights here are many and varied. The aforementioned "Revisit The Past (Who Says You Can't)" sounds like it is a great outtake from the last Paul Collins disc, which only makes sense as Blakely played on that record too. "Every Single Teardrop is a Tidal Wave" is a perfect slice of classic power pop with just a dash of LMNOP quirkiness. "The Most Beautiful Girl in the World" channels a little bit of later John Lennon to stunning effect.

"Kissing You" lands solidly in its groove two seconds in and never lets go. Really, if you do not find yourself swaying along with the music you might need to see a doctor. "Wave Goodbye (There She Goes)" and "Yes You Can" supply loads of energy to proceedings, while the classy "I'm In Love With You" ably takes the role of Badfingery ballad.

It all adds up to quite a thrill indeed.