So, what exactly am I supposed to impart here? Maybe you'd like to know how long it has been since we've had a new album from Cotton Mather? The answer to that question is it has been 15 years since their last new release The Big Picture, but really there isn't much to glean from that information. Speaking for myself, those 15 years have been filled with glorious sounds. Whoever I was and whatever I was listening to in 2001 I know for a certainty my musical world is simply richer and more satisfying today. That's all good, right? 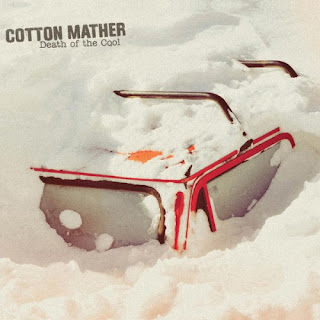 Maybe it is, maybe it isn't. An album like Death of the Cool hints at a potential world very different than the one I actually enjoyed. Imagine a world where Cotton Mather wasn't, to all intents and purposes, silent for a decade and a half. Such a place might not be the best of all possible worlds, but there is no doubt it would be a better one.

Or to put it more succinctly, I am a greedy bastard and I would love to have more Cotton Mather. A lot more.

"The Book of Too late Change" launches the disc into our ears with the propulsive force of a high velocity artillery shell. It is high energy, especially the fantastic drumming, and wild without being out of control. It is a meticulously planned riot, if that is even possible. "Close to the Sun" is a groovy, vibey rock song that manages to be classy and sleazy all at once.

What comes as a bit of a surprise, to me at least, is how often Death of the Cool is reminiscent of the band's first album Cotton is King. "Candy Lilac," "Child Bride," and "The End of DeWitt Finley" all feature a softer pop feel in a Difford & Tillbrook vein, sweetly tuneful with lyrics that can twist the sweetness ever so slightly in unexpected directions.

Indeed, the breadth of the album as a whole is amazing. It is only 11 tracks long, but it feels bigger and more expansive because so many different sounds are utilized. "The Middle of Nowhere" gives us a sparse soundscape filled with subtle landmarks, "Queen of Swords" gives us a quiet pop-baroque gem both simple and intricate, and "Waters Raging" yells at us for awhile. All of them are really good at what they do.

At the end of the day this greedy bastard has a simple plea: more, please. 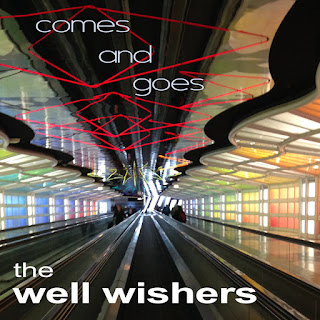 Artists, if they stay productive enough over a long enough period of time, reach a point where their own back catalog can weigh them down. It's inevitable, as well, that their long time listeners will be tempted to view a new effort in the context of their work as a whole. Really, these realities are simply two sides to the same coin. Expectations are generated and these in turn are either reacted to or rebelled against by musicians and fans alike. At its worst the reaction can lead to artists recording, and fans accepting, bland reworkings or pastiches of earlier success. Rebellion holds its own dangers as well, as artists in their zeal sometime miss the fine line between creative destruction and "burn it all down" nihilism that comes across as contempt for their long time supporters. (Paging Todd Rundgren.)

Happily, neither of these dire possibilities describe the newest release from The Well Wishers, Comes And Goes, which rises above the expectations a decade plus long recording career will generate to give power pop fans a new thrill or two (or five.) Part of this is achieved by the production value of the album. This is always pretty good on Well Wishers discs, but there is a greater emphasis on a depth of sound here which is both noticeable and appreciated. Rocking tracks like "Get on By," "Somebody Lied," and especially, "Three Nights in Bristol"  benefit most from the production quality. Speed, high energy, and plain old kick ass loudness, though present in abundance, don't have to do all the hard work here, which allows the quality of the songwriting to shine through the decibels.

Songwriter Jeff Shelton isn't afraid of getting achingly pretty if it suits him. The sing song quality of a track like "Comes Around," complete with a charming background vocal from fellow power pop vet Lisa Mychols, is bouncy and soothing all at once. "Nobody's Dancing Alone" only manages to be the loveliest melody in the entire Well Wishers' oeuvre. (And, no, I wouldn't have used the word "oeuvre" if this song wasn't so damn beautiful.)

Other standouts are the opening number "Impossible to Blame" a tune in the classic power pop mode. You've simply got to have one of those, right? "Tomorrow" is a terrific song with a touch of 90's Brit pop layered on to nice effect. "Ill Equipped" manages to catch a specific REM vibe (think "Can't Get There From Here") and make it sound organically true to this album.

Shelton maybe telling us by the album title that nothing, not even the very best of things, stays the same forever, but at least on this recording we can be happy there will always be a lot of here here.  To that I'll add "Hear! Hear!"