Review: Nick Piunti - Beyond The Static 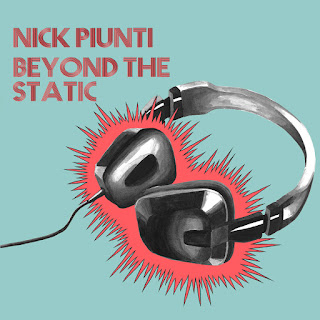 The basic needs of humanity are pretty simple: food, water, shelter, companionship, sex, and electric guitars. Okay, okay... so there is some debate about the absolute necessity of sex but the others are indisputable.

I'm pretty sure Nick Piunti would agree with me on this, as his 2015 release Beyond The Static is crunchy guitar power pop at its most elemental and vital. The approach here both in songwriting and production is direct. There are no baroque flourishes to distract a listener, only good, simple, honest tunesmithing by a skilled practitioner of the art. It's a sound, part Posies, part Matthew Sweet, part 70's bar band, that defined the center of power pop in the first decade of the 21st Century. It is as worn and warm as a favorite comfy sofa. The only thing required is to sink into it and feel good.

"It's a Trap" kicks things off with high energy and a driving beat. It is the sort of song that pulls you along because it is so straightforward and earnest. In a similar vein "Time Machine" piles on the chunky power chords and keeps things revved up to a high pitch.

Songs like "Six Bands," the closest thing to a ballad on the record, give us a bit of a breather with its clever lyric expounding on a girl "drowning in the talent pool." The bouncy strum of "Seven Days a Week" is another winner, as is the highly polished "Fell For You" which wears its heart on its sleeve, which a song this direct and heartfelt should. Once again, the feel is just right.

The absolute best thing on the record is the second track on it, "Heart Stops Beating." It is a glorious power pop tour de force filled with hand claps, call and response vocals, dreamy sounding keyboards, and one of the most perfectly placed "hey!"s in the history of rock music. Alone this song would make the album worth picking up. The fact that so much of the album is also terrific makes it all the better.

Maybe owning this record wouldn't forestall the need for sex forever, but it would sure make celibacy a lot more tolerable. 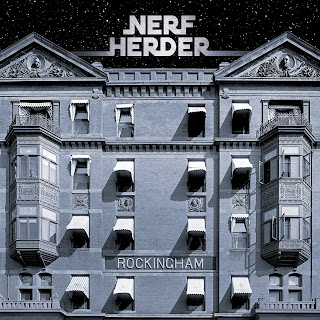 I must confess I'm not a huge fan of the whole nerd culture thing. It's all too self-consciously precious and, at its worst, narcissistic to appeal to me despite my admitted affinities for Monty Python, complex board games and MST3K. As a result an album dedicated to this particular pseudo sub-culture isn't exactly in my wheelhouse. That being said, I've enjoyed Parry Gripp's amusing songs on YouTube, and I simply adore Linus Dotson (not that there is anything wrong with that,) so when the chance came to pre-order this album I thought "oh, what the hell."

I'm glad I did. Rockingham is not going to cause anyone to shun their copy of Revolver or even the first Fountains of Wayne record, but there are far worse ways to spend an hour. "Portland" kicks off with a rant against everything that, frankly, needed to ranted about when it comes to rainy Pacific Northwest cities obsessed with their own shit. Sure, it is a bit of an easy target, but no one can claim they don't deserve it. "At the Con" and "Allie Goertz" win with wit and obvious charm.

The high point of the album comes with the terrific "We Opened for Weezer" a fond reminiscence of 1990's days gone by that rises above being an exercise in simple name dropping. They might not have meant to do it but they struck genuine poignancy. However, the album will not allow us to grow melancholic. Before you can blink the high octane power pop of "Jackie Got Married" is ready to whisk you away and that is a very good thing.

The second half of the album loses a little steam. "I'm the Droid (You're Looking For)" never really lives up to its title. "Ghostbusters III" and "Doctor Who" are energetic but a little one note. Luckily, the truly funny and catchy "Stock Photo Girl" comes along to entertain, while the album ender "Close Your Eyes and Dream" comes across like an inside joke we've all been invited to join. It's a bit of a microcosm of the whole album in that it asks "Why don't you come along? This will be fun!" They're not wrong.

It is a sad age we live in. 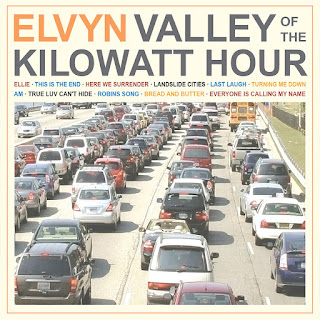 Growing up in the 1970's and coming of age in the 1980's I would have never imagined living long enough to experience the nadir of the album as an artform. Little did I realize it would take less than 25 years for the vital impulse that brought us everything from Rubber Soul and Pet Sounds to Spilt Milk and Girlfriend, not to mention everything in-between, to come sputtering to a halt. Instead we live in an age where pop music is all about the single, the novelty, the intangible, the disposable. We've even witnessed the sad spectacle of established artists giving away their new album as if they were slightly embarrassed at having created such a product so at odds with the ethos of today.

Unlike impotent critics like yours truly (culturally speaking only, thankfully), Canadian power poppers Elvyn can do more than rage against the machine. With their late 2015 release, Valley of the Kilowatt Hour, Elvyn reminds us all what the album had and has to offer. Maybe it was the circa 1965 album art that triggered this particular rant of mine, but the look and feel of the cover fits perfectly with the sounds contained within.

I am not saying the album sounds like mid 60's pop music. Oh, there is a lovely Beach Boys tinged track ("Robins Song"), but the emphasis is on the band displaying an impressive mastery of their own sound. That sounds draws equally from americana/roots music, think of the poppier side of fellow Canadians Blue Rodeo, and 90's alt guitar rock in the Toad the Wet Sprocket vein, with occasional nods to classic 60's sounds like the aforementioned Beach Boys and Simon & Garfunkel.

There are 11 tracks on this album and it is almost right to say there are 11 highlights on it. "Ellie" invites you to sing your heart out with its lovely melody and "everyone join in" chorus. "This is the End" with its working stiff anthem lyric is just as engaging, and the groovy shuffle of "Landslide Cities" could get even the most lethargic of us to get on their feet to sway rhythmically. "Turning me Down" is an acoustic guitar and electric organ toe-tapper (yeah, that's a thing) that simply charms.

Maybe we are walking among our own ruins and we haven't realized it yet. However, if we can have albums like this one playing in the background it won't be nearly as bad as it might be.