Review: Meyerman - Who Do You Think You Are? 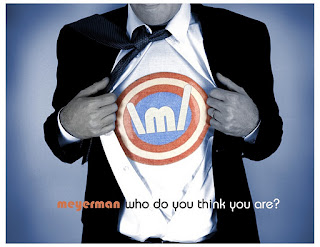 The way the whole music review thing usually works is I give you a sense of whether or not I like an album along with some sense of what the music sounds like. The latter is accomplished by making comparisons with other artist's music with which folks may be familiar. The point isn't really to say the music being reviewed could be mistaken in any way with that of the other artists mentioned. It usually just means the general approach to their material is akin to things the comparison artist has done. It doesn't mean if you like the artists employed in the comparison you will necessarily like this reviewed work.

This isn't the usual review. I can say it straight out. If you like the fantastic English band The Candyskins you will dig Meyerman's Who Do You Think You Are? A lot.

I have no idea if the similarities represent an intentional choice or if it is a happy accident, but the parallels are unmistakable. The album begins with the track "Tonight," a great tune which would have easily been at home had it appeared on The Candyskins Death Of A Minor TV Celebrity. There is simply something about the way many of these songs are put together, from phrasing to instrumentation to production, you could sometimes swear you are listening to a band from Oxfordshire and not New Jersey. The groovy "Xrayspex" is another great tune where the Candyskin-esque qualities shine.

This is not to say this material is simply derivative. It isn't. It stands on its own two feet, and kicks ass on its own terms.

"Immaculate Mansions" and "New Direction" cover old power pop subject matters, life in the burbs and the drive for music industry success, but does so with venom and irony as needed. "Bitter End" is a driving rocker that may just be the best thing on the album.

The best quality of this album is the way some tunes are unabashed goodtime sing-alongs (the uber-power poppy "Permission to Rock You" leaps to mind), while others are much more ambitious (the great album ender "Elephants"). This leaves this listener really wanting to hear where Meyerman goes from here.