Truth be told, I'm a goddamn cultist at heart. I'll gladly argue about arcane pieces of music history all night long, if I could only find someone local who knows what the hell I'm talking about. I would also happily contribute to the building of a modern pantheon of power pop demi-gods as long as there is a spot reserved for Greg Pope. The former front-man/song-writer for Edmund's Crown is quietly (and loudly) putting together a resume of pop music that can stand proudly among the best of the last twenty years. 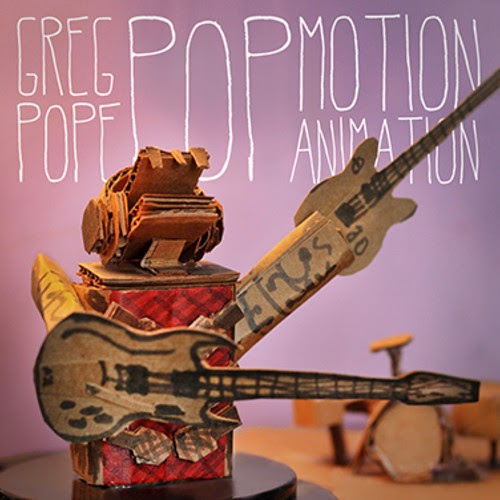 You can add the splendid (and pithy) Pop Motion Animation to the ranks of first rate Pope releases. Pope certainly knows what he's doing in these solo albums. There is a surety and a confidence that carries each song to exactly where it needs to go resulting in another rewarding listening experience.

The album begins with a terrific one-two punch with the sparkling "Partner In Crime," another in a string of Pope lyrics looking at the dynamics of friendship, and the marvelously tuneful "More Like You," a perfectly realized jewel of a song.

"The Mattress" is a driving piece of southern tinged rock and a top-notch example of the genre. "Don't Wait" and "The Hope Of Escape" are both lovely acoustic ballads, the former being a hell of a nice sing-along as well. "The Yeti" is a tone perfect bit of 1970's AM radio melodrama shlock, made all the more effective by Pope's dead straight performance. Even a hint of a knowing wink would have totally ruined the whole thing, but Pope is far too assured to allow that to happen.

Indeed, Pope's sense of himself is directly expressed in what feels like, to me at least, the heart of the record: "Rebel Inside," nicely encapsulates the position any part-time power popper must confront in a full-time world that doesn't know or appreciate what may lie below. When Pope sings "I'm just another worker bee, well isn't that nice? But what you probably can't see is I'm making a fist that wants to punch through the box you're putting me in!" it's damn hard not to make that fist yourself. That to me is the sign of an artist that is doing it right. We are invited along and given the inside scoop, so much so that we cannot help but to identify with the artist.

I'm not sure exactly how he does it. I'm just glad he does.

This review must begin with an admission. I am not a member of the Church of Chilton.

Well, my power pop cred has just been blown to hell... but let me explain. It isn't that I don't dig Big Star. I do. It's just that in my view there are two, and only two, Big Star albums that are worth a damn, #1 Record, and Radio City. The dreariness that is Sister Lovers ( or 3rd or whatever the hell you want to call it) never, ever did a thing for me, nor did the majority of Alex Chilton's subsequent solo work or odd things like Panther Burns. In the end I simply was not impressed by the air of curmudgeonly pop/rock Svengali that swirled around the persona of Chilton during the 80's and 90's, iconic Replacements song notwithstanding. 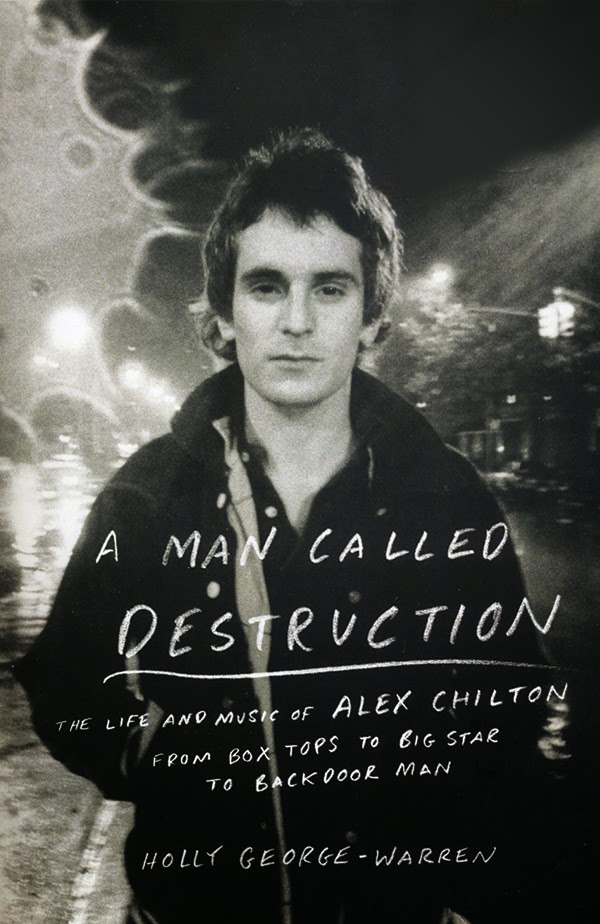 That being said I approached this biography of Chilton (A Man Called Destruction: The Life and Music of Alex Chilton from Box Tops to Big Star to Backdoor Man, by Holly George-Warren, Viking Penguin, 2014) with a certain amount of circumspection if not downright skepticism. Would the author approach her subject with the zeal of a true believer or would there be room for a critical eye? The answer to that question would determine if the book would be a worthwhile read for a person like me or not. Authors of rock biographies have often been of the "enthusiast" variety, and if George-Warren fell into that category, well I would be in for a long uninformative ride.

Happily I can report that while this book is written by someone who obviously knew, liked and admired Chilton there is not even the hint of a trace of a sycophantic voice here. George-Warren also does a nice job of not over-selling or over-determining her topic. She provides a wealth of information and invites the reader to come up with their own conclusions as to why Chilton took the path he did. This is a particularly wise choice as even Chilton himself never seemed to be exactly sure when it came to his motivations. His mercurial nature, probably reinforced by his predilection for astrology, only meant wherever he was one day didn't necessarily have a bearing on where he would be the next.

The book does a fine job of covering the biographical necessities, providing a wealth of interviews and anecdotes to flesh out Chilton's early life and music career. George-Warren handles important but somewhat extraneous information well, such as the convoluted troubles with Ardent and Stax Records which ultimately doomed the initial Big Star releases to commercial failure, giving us enough context to understand what happened without drowning the narrative in waves of unnecessary detail.

There may be moments where there seems to be a bit of a hole in our understanding, but that seems to be the way Chilton wanted it. Seemingly he could be perverse for the sheer hell of it. It is a testament to the quality of this book as a biography that it doesn't degenerate into "one damn thing after another" even if the life Chilton lived invites us at times to adopt such a view. It is also a big part of why this book is so enjoyable, even for those of us who are not acolytes in the Church of Chilton.

Readers of this blog will probably have picked up on the fact that I'm partial to the work of one Jeff Shelton. (See here, here, and here for the evidence.) So, when it comes time to review another release from Shelton's one-man-band effort The Well Wishers no one will be entirely surprised to discover that I like it. 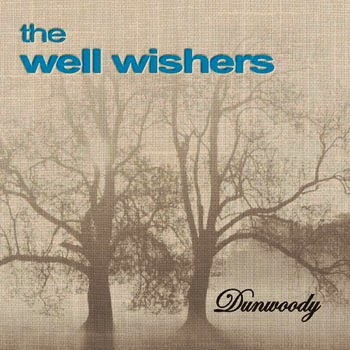 However, it's not really that simple. For starters, this particular release is an EP. EP's are notoriously variable affairs. Sometimes they are filled with half-realized demos or tracks rightfully cut from full length albums. Others collect assorted oddities or the occasional live performance to fill out the needed 5 or 6 track length, resulting in an uninspired mishmash suitable for only die-hard fans and shut-ins. Given the relatively prolific nature of Shelton's output I was a little afraid of what I would get.

I needn't have worried. In Dunwoody Shelton presents us with a suite of songs that simultaneously sound like The Well Wishers  and doesn't really sound like they would necessarily fit comfortably on any of the previous releases. There is a moody and subdued jangle here, at time evoking REM or, especially, the best Toad The Wet Sprocket. This is most evident on the gently driving "Real Today" which feels half-whispered even though it does get momentum behind it, particularly in the middle eight.

The sprightly "Open Up Your Eyes" comes closest to the classic Well Wishers sound, though it too doesn't deviate from the light melancholy that animates (as much as melancholy can) things. The track "Good Luck" is probably the heart and soul of this little release, a tuneful and folky number at once both intricate and simple, just like the best power pop often is.

Review: The Nines - The Nines 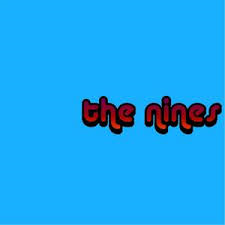 In the same vein is a pop album like this eponymously titled effort from The Nines led by tune smith Steve Eggers. The jumping off point here sound wise, as it always seems to be with Eggers, is solo Macca and XTC with hints of the likes of ELO, Pugwash and early Elton John thrown in for good measure.

Indeed, the XTC influence jumps out of the headphones on the slightly languid "No More Time" and the stunning "The Virtuous Man," which lyrically brings Ray Davies to mind. Macca is brought by the back-to-back duo of "Don't Worry Misery" and the lovely "Seasons" which sounds a little like an outtake from Ram.

Uptempo numbers are not neglected, with the album starter, "Backseats," "Jack McGee," and, especially, the terrific "Change on the Main Street" standing out among the tracks.

It is a shame that power pop merits so little commercial support these days as a number of Egger's songs seem to be suited to a greater level of production then they are given here. Even so this album always pleases, though I suspect given enough studio time and money The Nines could produce an album that would blow your doors off.

Review: The Connection - Let It Rock!

2013 was such a good year that I'm only now sufficiently recovered to write about it.

Or, 2013 sucked so very hard I've only just begun to unearth the worthwhile nuggets.

Pick whichever one sounds better to you. 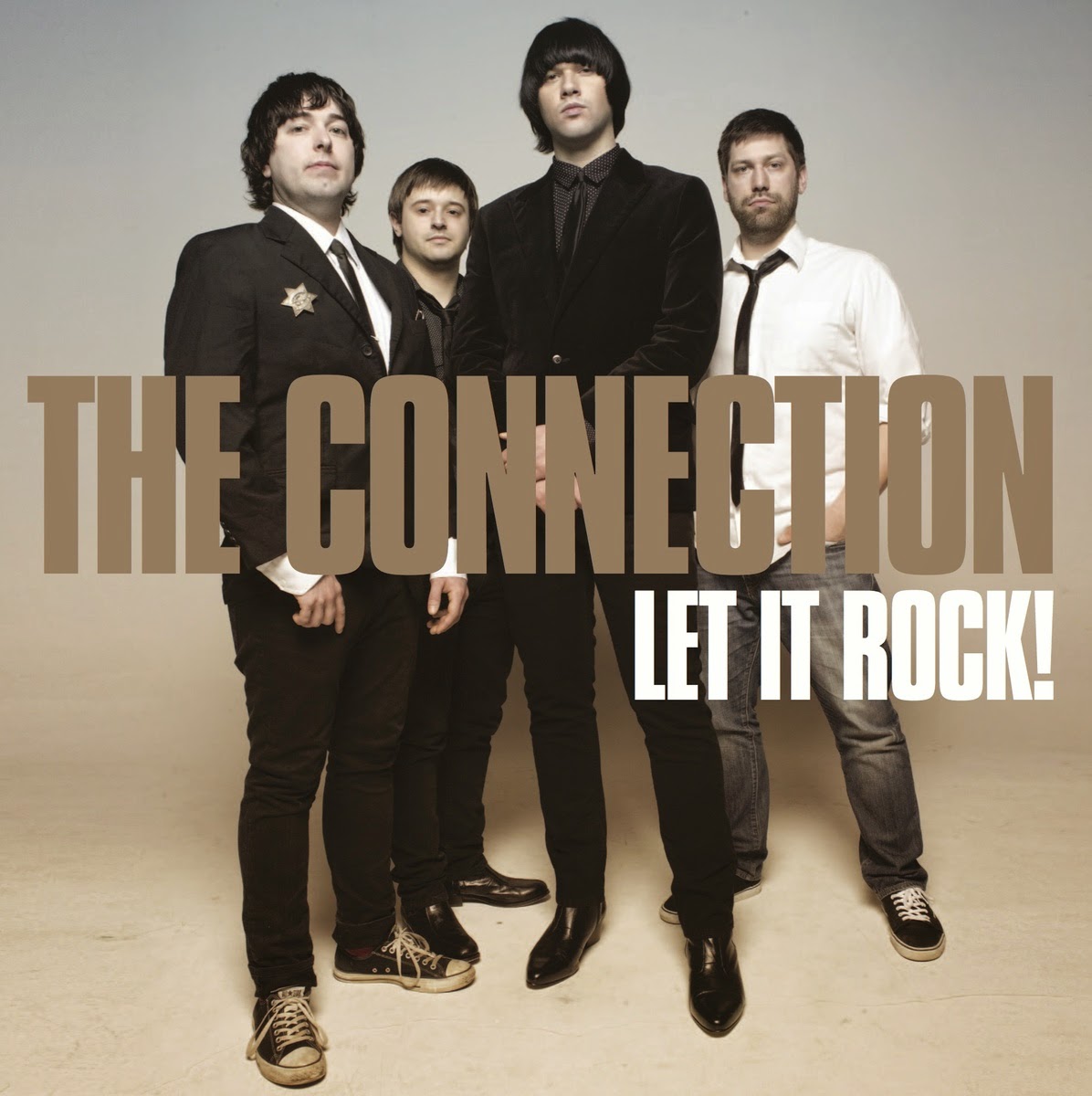 In either circumstance Let It Rock! by the Connection is a terrific record. Channeling equal parts early Beatles, Paul Collins, and down and dirty 60's garage rock, the Connection grabs hold of the listener early on and either throttles them or sends them to the dance floor. (depending upon how one feels about dancing.) "Wrong Side of 25" and "Crawling From the Wreckage (Of a Saturday Night)" set the tone for the album with energy, verve and good humor. "She's A Keeper" is a lovely little slice of crystal clean guitar pop, and a serious contender for song of the year. (2013 that is.)

"Nothing About Me" explores the rootsy side of things with aplomb. (That's right. I dropped the "A" bomb. Deal with it.) "Thinking About Leaving" and the Stones-ish "Girls In This Town" pump up the rock quotient to just this side of screaming hot. The latter track in particular gets freight train momentum behind with its piano and horns adding just what we need, so much, in fact, that when they yell "...it don't mean that we gotta be friends!" it's hard not to yell along. (Warning: This will make the wife look at you funny.)

Other standouts include the introspective "Not How It's Gonna Be," the quirky sing-a-long "Melinda," and a terrific cover of the Chuck Berry classic which gives the album it's name.

As if that isn't enough, the physical CD product adds on eight (well, nine, in fact) bonus tracks that rock just as hard.