All Things Must Pass... Dammit All To Hell

I've updated this elsewhere but I should make it official here. The Pure Pop Pub radio station will soon cease to be. I received an email yesterday that the Live365 platform is most likely going under for good within the next month or so. The rules for royalties are changing and the upshot is small niche broadcasters like myself will no longer have a way to continue, and as we made up a large part of the Live365 business model they are being squeezed out as well. I could, if I wanted, spend upwards of $1000 a year to continue to broadcast but, yeah, that ain't gonna happen. I like all my listeners very much but I do not have that kind of money to throw into what is essentially a hobby.

The Pure Pop Pub ran for over 7 years and in that time I have had countless interactions with listeners and artists that have made the whole experience incredibly rewarding, even if I was paying for the privilege. I am most saddened by the fact that yet another outlet for indie artists to get their music known is being silenced. Something may rise in the future to take its place but from the looks of things it may be awhile in coming.

I will do my bit here on the Pure Pop Pub blog where I will continue my vain effort to dance about architecture. The "Let's Go Pop!" podcast may or may not continue. I have not heard from my podcast platform but the new rules may also bring about the end of most music podcasts as well. A wait and see approach will have to be adopted.

Allow me to wish you all a very happy New Year.

Review: Pugwash - Play This Intimately (as if among friends)

A truly great rock and roll record is supposed to have a bit of violence associated with it. After all, it's built into the name of the genre. We talk about people's worlds being "rocked" when they are turned upside down by turmoil and tumult. Successful records are declared to be "hits" and "smashes!" "Let's rock and roll" has become synonymous with engaging in any sort of decisive action, from starting a long road trip to starting a long war. Even the sexual connotations associated with rock and roll are more violent than not. Rock and roll sex isn't gentle lovemaking, its two, at least, frenzied people trying to screw each others brains out. 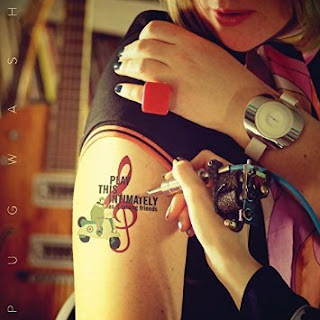 However, this music is also about breaking the rules and not giving a damn about what is "supposed" to be. Good thing too, because its how we wind up with records like Play This Intimately (as if among freinds), Pugwash's intricate and subtle triumph.

This isn't to say that the record is devoid of energy. "Kicking and Screaming" starts the album off in glorious pop/rock fashion. It's all chiming guitars and all pop hooks all the time. "Hung Myself Out To Dry" is a bouncy and jaunty slice of pop magic of a vein well mined before in the Pugwash catalog, but welcome all the same. Nobody on earth does this sort of thing better than Thomas Walsh and company. "You Could Always Cry" effects a pop/country/folk vibe complete with chugging train harmonica. When you listen to it you hope someone is back there playing their washboard.

As good as the quicker songs are it is the slower material that pushes the album to its greatest heights. "Lucky in Every Way" offers a lush and tuneful soundscape that floats on your ears like a cool breeze on a summer's day.... or something like that. I swear whenever I hear it I just want to open a couple bottles of wine and sink into bliss. "Oh Happy Days" sounds like it was pulled off the Kinks' Village Green Preservation Society sessions, which is probably why Pugwash got Ray Davies to help with the backing vocals on the track. It is damn near perfect.

"All The Way From Love" is a Roy Orbison's style crooner positively dripping with style and substance. The album ending track, "We Are Everywhere," takes the moody mellotron vibe of "Blue Jay Way" and tweaks it into something even more substantial. When it ends, announced by the boom of a last bass drum, you know you've been on one hell of a trip with your good friends in Pugwash.

After a long hiatus a new episode of my podcast has dropped. Better late than never? Maybe? Well.... let's go with that for the moment.
at September 08, 2015 No comments:

Four members of the Old Dominion University student body were publicly executed and their corpses summarily expelled from the school when it was discovered the students had callously and deliberately played the song “Stacy’s Mom” at a Opening Week Bar-B-Que. The song, written and performed by the terrorist front group Fountains of Wayne, features lewd and indecent lyrics which insist that “Stacy’s mom has got it going on” and depicts the treasured societal icon is a state of undress (“with just a towel on”.)

While the quick and decisive action by the university, which has a solid reputation for graduating only virgins, was applauded by most, some worried there had been undue haste shown. “It all happened so fast we never even had the chance to publicly flog these vile perpetrators!” lamented Sheri Abercrombisen of the student led organization, Aggrieved Sisterhood of Solidarity (or A.S.S.).  A.S.S., best known for their campaign to place trigger warnings on campus for the Sun (“It is so bright and cheerful all the time. Doesn’t it know some of us are really hurting?”) complained other dangerous conduct was going on right under the noses of authorities. “I know for a fact,” said Abercrombisen at a hastily convened news conference attended by 317 journalists, “that another party was playing a Rock Hit’s of the 70’s compilation which included a vile song which depicts a mother having sexual relations on a living room floor, all the while the song repeats that “we’re all all right” when we very clearly are not all all right.”

Ms. Abercrombisen subsequently had to be sedated and placed under a doctor’s care.

At press time Robin Zander was unavailable for comment.
at August 26, 2015 No comments:

Now, you wouldn't know it to look at this site, but I am, in fact, still among the living. To prove it I today updated the radio station entirely. Yes, that means every track was removed and a new lineup uploaded. Yes, it did take a long time, but it was totally worth it. I've been listening to it all afternoon and it has been kicking serious buttocks!

As for the quiet around here, well, there was a bunch of real world stuff taking a serious bite out of my time. I also recently submitted a music related book proposal to a publisher. If that comes through I'll tell you all about it. (It isn't power pop related, but it is totally cool.)

Hopefully, there will be a bit of a lull that will allow me to be more engaged around here. I'll attempt to reinforce that by putting out something with a bit of substance soon.

Promise. Cross my heart and hope to listen to nothing but boy bands for a year.
at August 04, 2015 No comments: